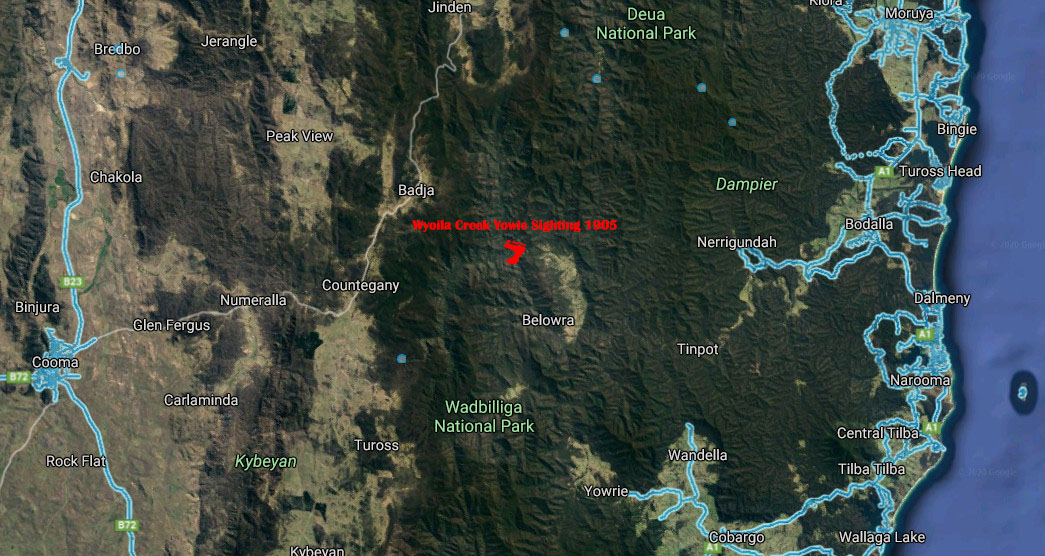 On May 7 1905 4 men traveling through the Wyoila area of the Belowra region sighted a Yowie.

Below is the transcribed portion of the story as it appeared in the Bega newspaper in 1905. Note Wyoila Creek has a slightly different spelling in modern times. 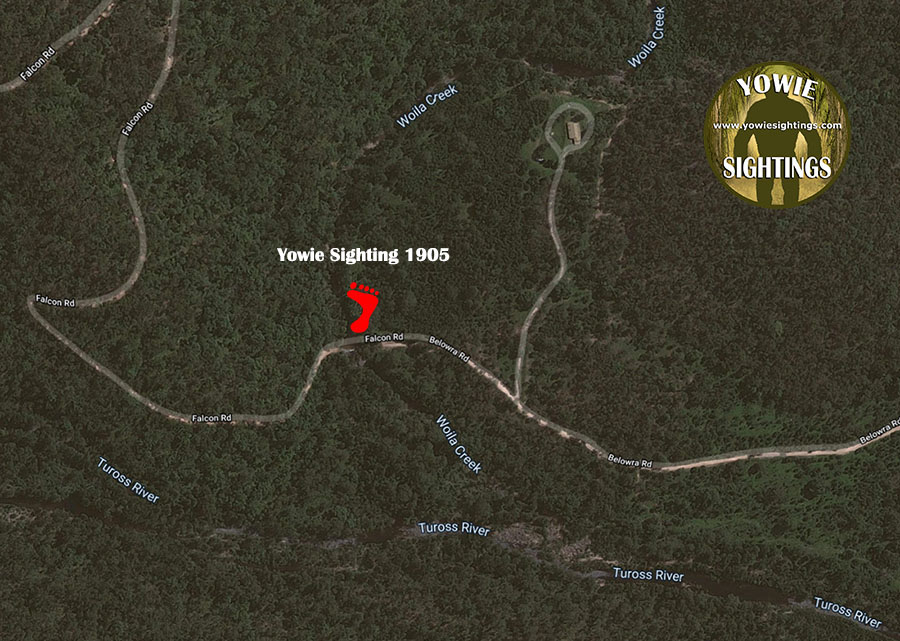 A Hairy Man. – At various times for many years past different people have vowed to seeing an animal resembling a hairy man in the mountains and almost unknown country around Beloura. The late C.J. Byrne, who frequented those parts a good deal many years ago is reported to have seen this strange animal, as did also a man who was employed by Mr Cowdroy, of Bega. The blacks in those days also spoke of such a thing and were always very frightened when in the vicinity of what is known as Wyoila Creek. Now comes the story that four persons – Messrs J Wall (senior), Harry Staples, J L Wall and W Roberts – who are employed up there by Mr Cowdroy, have seen the monstrosity. Three of the persons named belong to Bega, and they have addressed the following letter to this paper:

"While exploring on Sunday May 7, we saw a strange looking animal, just like a hairy man, run out of some rocks and along a beaten track, leaving a foottrack similar to a mans. The footmarks were about 14 inches long, and the animal appeared to be about 7ft high, with tremendously long arms, reaching below the knees. When it got about 100 yards away it stood and did not appear to be frightened, but after a while walked away gently in the direction of the Wyoila Creek mountains. None of us tried to hinder it, as it looked to fierce and the dogs refuse to go near it."

Simon P 7 months 5 days
An amazing account from a long time ago and very credible with 4 people involved. Look forward to seeing some more historical accounts. Thanks for posting this!!
1

John (Yowiesightings) 7 months 5 days
Thanks Simon! I'm glad you enjoyed it. We have plenty of historical records to add to the website and we continue to search for them. We've been fortunate to have members of the public come forth with quite a few historical reports from their local areas.
1