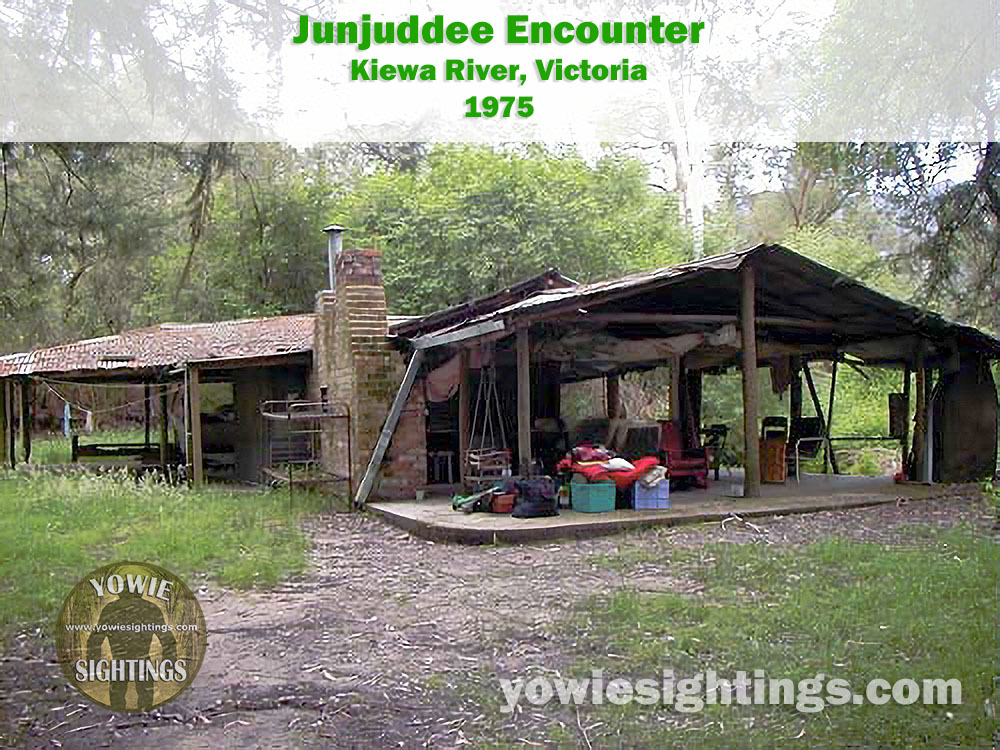 In 1975 a young Anthony Dalby was dozing off to sleep in Chic's Hut, a fisherman's hut on the Kiewa River in North east Victoria. He was woken from his drowsy sleep as two strange visitors entered. Anthony tells of his incredible encounter below.

It was during a Greenwells’ Club fishing weekend with about eight members of the club attending. Chic’s Hut is a large open fishing hut measuring about 8x6 meters, in an L-shaped layout, with one wing off to the South and one off to the West. There is a flywire kitchen in the middle of the hut and a fireplace on the western side of the southern wing. This is where I slept with my feet toward the kitchen. At that time there were roll-down tarpaulin sides on the hut. 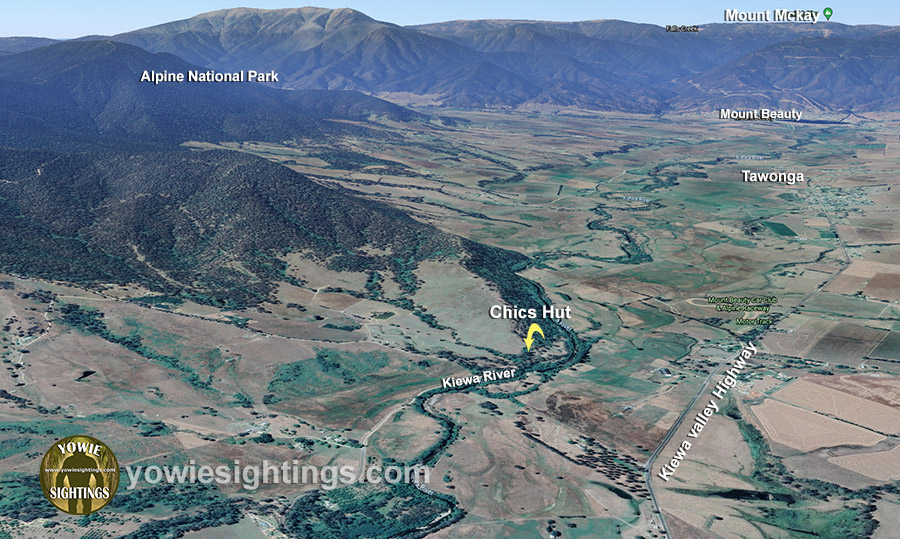 After fishing the afternoon rise, the group had decided to go to the Bogong Hotel for a beer and a counter meal for those who hadn’t already eaten. My dad left with the second bunch and I ensured him I was fine alone. He left me a torch which was the old style twin D cell battery style. I went to bed at about 7:30 pm as the second car left. I faced the burning fire with my back to the tarpaulin side and huddled deep into my sleeping bag. It was a cold evening after late snow on the Alps during that week.

I lay there for quite a while and almost dozed off whilst watching the last log of the fire burn down, when then, to my surprise I heard the creak of the kitchen door opening firmly! I peered down past my feet to see a 1.5-meter tall silhouette walking into the kitchen. I watched nervously as it walked about the table in the middle of the kitchen. It was a fairly bright moonlit night, but there was no other light under the cabin roof. 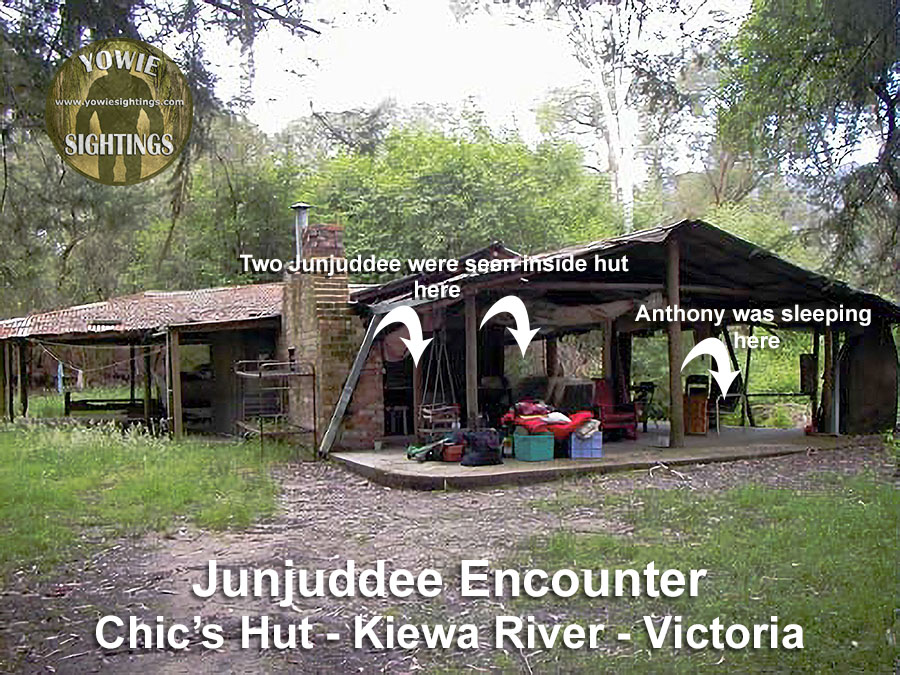 After a minute or so, it dragged a chair to the high shelf above the sink on the western side of the kitchen and pulled something down. At this moment the door creaked again and yet another creature of the same size entered the kitchen. The first was now off the chair and I could hear the sound of crinkling plastic, so it was obviously eating. The second creature approaches the first and a short argument of sorts erupted, causing the second creature to then turn and walk out of the kitchen. The argument was not talking but inaudible and odd chattering, which I’d say was almost monkey-like.

My attention was now firmly fixed on this second creature in the dim light lifting a bag quite high and rattling it whilst not more than two meters from my feet. It then put this bag down with disinterest and took one step in my direction before I snapped. I flashed the torch on and went suddenly into some sort of shock with the massive rapid rush of the two creatures practically flying off out of the cabin in lightening fashion to the east and from where they’d emerged.

My heart raced and I was too afraid to leave my bed, until about forty minutes later when I, to my deep relief saw the lights of the first car returning. Looking back, I still can’t believe how fast these creatures swept off and down the steep slope beside the cabin. It was almost unbelievable. They do literally run like the wind. These creatures were similar in stature to a short and slightly stocky human, which made it easy for me to shelve the experience for years to come.

When my dad arrived back in the second car, I gave him the story of how two “blokes” had entered the cabin, which was the only way I could explain things to him. It must be noted that I bore the blame for opening and eating one of the fisherman’s biscuits. Dad made me swear that I hadn’t eaten the biscuits. It had to have made sense to him that I wouldn’t have thrown them about. This was the Friday night on the day that we arrived. Dad stayed with me on the second night and spent most of his time listening and looking about the cabin. I know he discussed this with his good friend and had serious suspicions. I also saw him talking confidentially to my mum back at home on the Sunday. He didn’t rouse on me, so he must have known more than I about these things at that stage, and has been a bit of a bushy himself.

Junjuddee are described as small hairy bipedal creatures similar to a Yowie but no taller than about 5ft and smaller reported.

The term Brown Jack is a term used to describe the small Yowie/Junjuddie by some Aboriginal groups.

An amazing encounter described by Anthony and we thank him for telling his story.

IF YOU SEE SOMETHING, SAY SOMETHING

If you have a Yowie sighting or encounter or know of one please get in touch and help with our sighting database and research.

This email address is being protected from spambots. You need JavaScript enabled to view it.

Tony Dalby 2 months 11 days
Thanks to John for reoprting my encounter, I had said that the Junjudee chatter was monkey like, but that's not really so, and I'd describe it more as a human with a tongue type of murmuring linguistics. I figured that they were kind of arguing over the snack from the insistent tones and body movements. The Kiewa River is famed for it's trout fishing, or was until the Greens stopped the stocking programme. In my later teen years I spent much of my time in the Australian bush and hope to get more stories of encounters published here soon.
1

Yowie sightings 2 months 11 days
Hi Tony, thanks again for your report! Very interesting description of the vocalizations. I remember listening to a linguistics expert from the US explaining the Sasquatch vocalizations. He explained that they "speak" in a speeded-up form of language. He was particularly talking about the famous Sierra sounds recorded in the 70s. Look forward to reading your stories here, Tony. Cheers, John
0