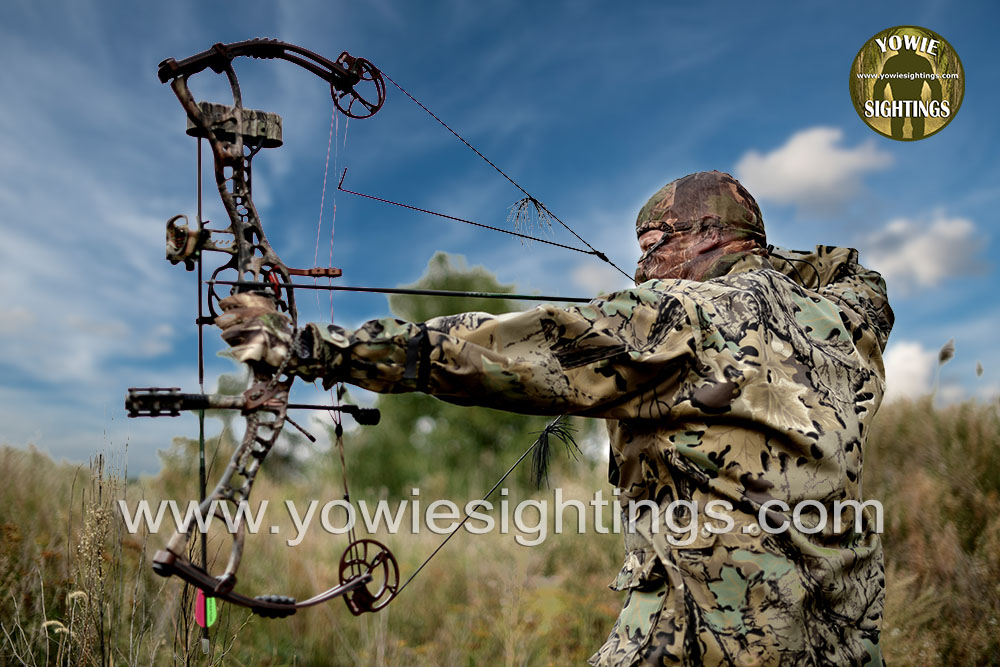 A bowhunter searching for wild pigs near the town of Kilkivan, QLD, is confronted by a charging Yowie. The Yowie encounter below is from Clint Maynard who provides the chilling account he had with a Yowie in a life or death situation. Here is his story as he presented it to us.

It was early in the morning and I had been hiking through the bush since just before sunrise hunting wild pigs. It was a brisk morning but beautiful and clear and I was about an hour or so into my hunt looking for pig tracks when I caught a glimpse of several pigs way ahead of me and too far to get a shot on them. I was pretty sure they hadn’t seen or heard me, so I moved quietly about 50 or so metres closer and settled beside some low bushes and began searching the bush and clearing ahead with my binoculars looking for the pigs. I was getting a slight wafting sour smell which I assumed was animal excrement, but it didn’t quite smell right to be this, and I thought maybe there is a dead carcass nearby. 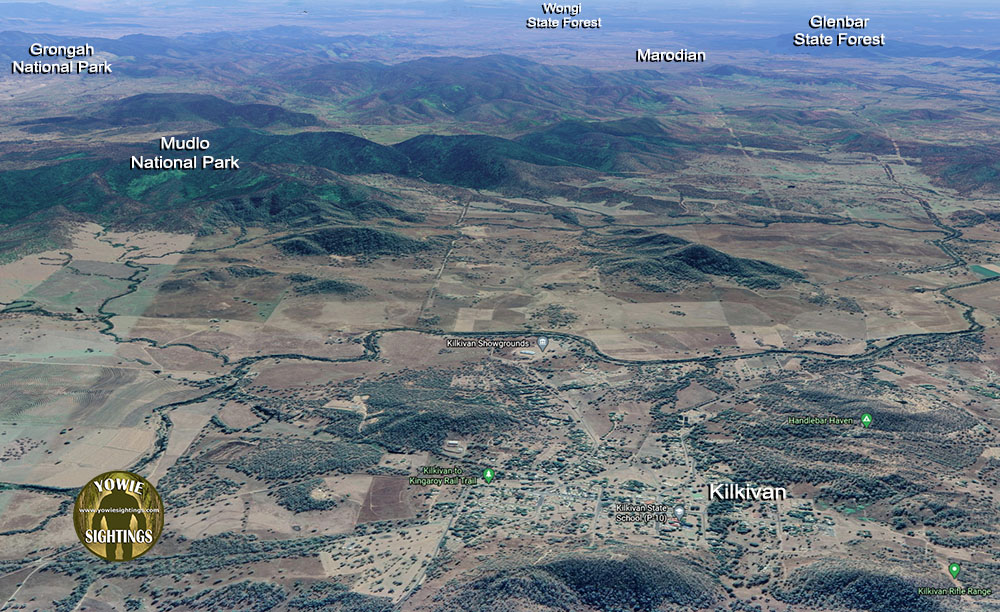 I  made a slow pan from my left to right searching for movement and as I panned back, the bush closer to me which was out of focus looked different, something was missing. I thought I’d scanned past a tree stump and some bushes that partially blocked my view through to where I was looking for the pigs. The tree stump was missing. I focussed on the bushes and I was getting a strong sense that something was there. As I scanned back to the right of the bushes, I instantly became alarmed and a real sense of terror set in. In the dappled sunlight, I realized I was looking at a very dark, hairy head and face of an extremely large creature in a crouching position and looking directly at me. What really got me anxious was the eyes and look on its face. Its eyes looked human and its intense stare shook me. Its face looked dark and I would say leathery and it was bearing its teeth and exposing a huge mouth. I knew it wasn’t human but the intelligence in its eyes shocked me. It blended in so well with its very dark brown, almost black, shaggy hair I didn’t realize it must have been in front me the whole time I had been looking towards where I had seen the pigs. The creature was in a crouching position and its slow rocking motion from side to side looked like it was ready to jump in my direction.

I started to hear a very low-level growl which I knew was this creature even though it was about 60 or so metres away. I became so scared at this point that I dropped my binoculars and frantically loaded up my bow. I knew I couldn’t outrun this creature which looked so massive it made me feel small and I’m 6ft3. I fumbled to quickly get my bow loaded and as I looked back at the creature to take aim it released an almighty roar and launched itself forward and at speed toward me on its two thick legs, mouth wide open and looking so incredibly frightening. I could see all its shape now, its long arms tearing and grasping at the bushes and thickset body as It stampeded towards me in huge big thumping steps. As it tore through the scrub I couldn’t believe how big this creature was, bigger than any human I had ever seen.

It got to about 30 metres from me when I got a shot away in sheer terror. With minimal aim, the arrow struck the creature deep into its right shoulder and it instantly stopped, grimacing, and clutching at the arrow and releasing an extremely loud, lion-like, growling sound that drowned out any other noise in the bush. I was almost hysterical with fear and my heart was absolutely racing. I had never heard anything so loud and terrifying and so loud that I could feel it. As I began moving as quickly backward as I could. The creature had taken its attention off me and as I stumbled backwards I watched it snap the protruding arrow with its opposite hand as it kept furiously pawing at its shoulder and making deep grunting sounds. In a second it looked back at me with such a fierce look and grimace that I thought, this was it. I knew a headshot would be the only way to save me from sure death. As I struggled to load up and aim, the creature let out another incredible growl, turned and ran furiously into the trees off to my right in big thumping steps. I aimed wildly as it moved away and got off a second shot which just missed the creature as it ran past a tree. I continued backtracking, my bow at the ready, and I could hear the creature tearing through the trees until I couldn't hear it. I knew that if the creature came back I wouldn’t make it to my vehicle and I was relieved a little when I finally made it back into some open country in the small valley I used to get into the area. I eventually made it back to my vehicle, bathed in sweat and gasping for water and without any further encounter. I didn’t wait for a second, climbed into my vehicle and sped away from the area. I was still filled with so much dread as I drove back along the dirt road half expecting the creature to reappear. 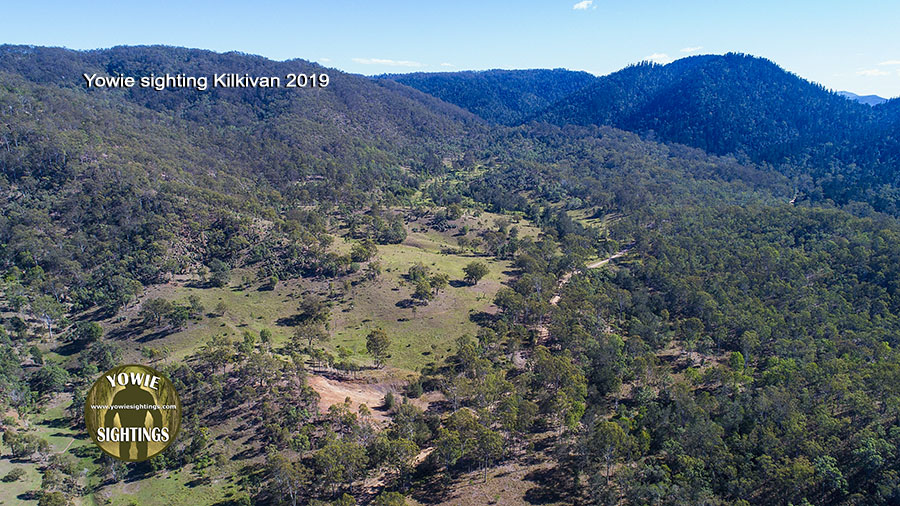 Bushland near Kilkivan where the Yowie was shot.

With all the fright of the charging creature, I dropped my binoculars and left a small backpack behind. I wont ever be going back to retrieve them.

An incredible report from Clint. He explained to us that he has struggled to come to terms with the life and death situation he survived and he has suffered extreme anxiety and nightmares ever since the incident. Clint has never spoken about this incident to anyone else other than his wife who was responsible for encouraging him to speak to us. We greatly applaud his courage in both surviving the incident and in coming forward.

Incidentally, this is not the first report we have received of the charging behaviour. There have been quite a few accounts of "bluff" charging which appears to be more of a warning than an attack. In this case, Clint was adamant that if he had not shot the creature he would have been attacked. The Yowie appears to be much more emboldened when encountered by a single person and far less with two or more people. We strongly advise people looking to find these creatures to do so in small groups for safety reasons.

If you have a Yowie encounter and you would like it published on our sightings map page or on the blog, please get in touch and email John -  This email address is being protected from spambots. You need JavaScript enabled to view it.

And remember If You See Something, Say Something,

Justine H 5 months 9 days
How terrifying, he was lucky to get away by the sounds. I never believed in Yowies but the more reports I read it gets harder to discount their existence. I hope the guy finds a way to overcome his apparent shock and psychological trauma.
3

Yowie Researcher 5 months 8 days
Thanks for the comment, Justine! There is so much anecdotal evidence regarding the Yowie in Australia and yet they are still considered folklore. To people that have encountered them as I have there is no question about their existence. Regarding Clint's encounter, we spoke to him for a long time before he decided to allow us to publish his encounter. He needed to talk to someone about it and I'm glad we could offer a little support. He's doing better now but still gets nightmares from time to time. He has never gone back into the bush since this incident. Cheers, John
2

KiwiPete 5 months 9 days
Wow, This is an amazing account. We get reports of them around here near Coffs Harbour and inland from time to time but they are almost always fleeting sightings and sometimes sounds.
1

Yowie Researcher 5 months 8 days
Thanks for the comment Kiwipete! We get quite a few reports from around your region. Don't forget to let us know if you have any sightings yourself or hear of any. Cheers John
1

Sean L 5 months 9 days
Probably the most important shot he'll ever make!!! It took a lot of courage to take this thing on but he did and he survives to talk about it. Just amazing.
1

Yowie Researcher 5 months 8 days
Thanks for the comment Sean! You are spot on. I dont think it would have been a very good outcome if he hadn't made the shot. Cheers, John
1

Ray 4 months 3 days
I do believe it was a female that he shot at as you suggested a bluff charge and bow hunter panicked and fired .Why the bluff charge because she had young nearby Bloody shame shooting at it with bow
1

Yowie Sightings 4 months 3 days
Hi Ray, thanks for the comments. It may well have been a female protecting young with a bluff charge. We thought it may have been hunting the same wild pigs the guy was tracking and saw him as competition but I like your suggestion. It was a shame he shot at it but I got the distinct impression when I spoke to him that he was incredibly frightened when it exploded from the bushes at him and he thought an attack was imminent. Good to hear from you, Ray!
1

Jason.T 12 days 12 hours
I understand the situation the bowhunting guy went through because it was a very familiar situation I had experienced 30+ years ago with a close encounter with a
16ft tall male Silverback Yowie. It was on all 4s with fists on the ground hunting and creeping up on a Kangaroo that suddenly bound away from fright which was the only reason I looked in that general direction and noticed it.
It lifted it's head and upon sniffing the air it could smell me. We both started staring at each other for about 4 seconds then it bared it's teeth at me. I said to myself oh shit.! I dropped to the ground and ran like a lizard on all of my 4 limbs and foiled it by escaping away at a distance. I slowly peeked back and it was standing upright and coming down slapping and whacking behind any bushes with its
hand. I eventually was able to
stand up and was running faster than an Olympian.
I accidentally snapped a dry branch on the ground and it heard this and gave chase through the bush and was smashing down whole trees
and trying to cut me off before I could get back to the car but I just beat it. Thank God. This guy was probably
interrupted it hunting those wild pigs as I did disturbing
this one hunting that Kangaroo. Also there was a great hole or cave nearby that a family of Yowies lived in that I only knew about and witnessed at a distance.
I have since revealed the location to the Government
Authorities.

Yowie Sightings 12 days 5 hours
Thanks for sharing your encounter, Jason. It's always fascinating to hear an encounter that has involved seeing some Yowie behaviour, in this case, hunting. I think you did well to get out of the area without injury. It would be great to hear some more about this Yowie encounter. You can email me at info@yowiesight ings.com. Cheers, John.
1